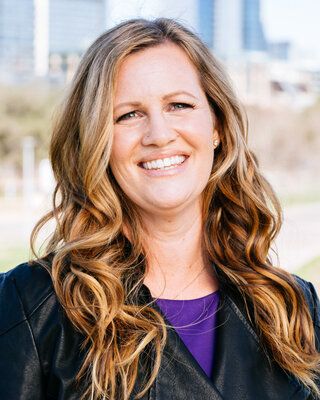 "We Don't Want People to Survive in Sobriety; We Want Them to Thrive."

“Everyone has experienced trauma to some degree, and everyone out there numbs. Whether the numbing strategy is binge-watching Netflix, or gorging on cookie dough, or injecting heroin, there's some way that we try to numb the pain from the experiences that we've been through. When numbing comes from alcohol or drugs, it's easy to get addicted. And it’s even reasonable to become addicted, because the drugs work—they numb the pain of those emotional wounds—until they stop working.”

This is the second in a series of posts introducing the people who make up Driftwood Recovery’s community of caregivers.

Matt Williamson: I’ve been told by a few people who have been your clients here that you have some amazing insights about trauma and attachment disorders. But since you’re the clinician at Driftwood who specializes in sex addiction and love addiction, maybe we should talk about that first.

MW: How do you define “attachment trauma,” then? It’s at the core of Driftwood’s treatment philosophy, but a lot of lay readers probably won't know what it means, or what an “attachment disorder” is.

SS: “Trauma” is not just shorthand for the pain from events like car accidents, sexual assaults or combat. It can refer to any negative experience that alters your trajectory, changing the way that you see the world.

Maybe your third grade teacher stood you up in front of the classroom to do a math problem, and you messed it up, and he shamed you. And from then on, you thought that you were terrible at math, you didn't like going to school, you tried to avoid seeing that teacher. You might have a problem with bald guys, because the guy who publicly shamed you was bald.

Oftentimes those smaller things have a big effect. And when you tell people about what you’re feeling, and you aren't validated, it becomes worse, because no one's there to nurture you and help you heal.

I once heard someone say that “attachment trauma” results whenever a primary caregiver is non-nurturing. That's a pretty drastic definition, and I don't know exactly how I feel about it. But I like to look at things on a continuum, and I would say that the continuum of attachment trauma begins with any non-nurturing behavior from a primary caregiver.

MW: But every parent on earth does things that are not nurturing. Are some of those traumas things that we just cope with, or deal with, during childhood, while others linger and become disruptive?

SS: Right, right. And surviving traumatic experiences can make us more resilient. But there are other traumas that we never quite wrap our minds around; we don't understand why they happened. To explain them, we tell ourselves: “I'm not worthy of love.” “I'm not deserving of compassion.” “I'm not good enough.” And as we move through the world, when bad things happen, we're like: “Oh, there's more evidence to put in the file.”

MW: Can you get more specific about the kinds of non-nurturing experiences that can change a person’s self-conception?

SS: A rupture during childhood can be perceived as abandonment, which is highly traumatic. If a parent has an affair and leaves abruptly—“see you later”—that’s a significant rupture of attachment, obviously.

But sometimes a rupture can happen because mom gets cancer and dies. A little kid may lack the cognitive ability to understand: it wasn't that mom wanted to leave. That child may develop some negative cognition that they carry into the world.

I had a client whose parents were both drug addicts. He didn't have a close attachment with either one of them. But he had grandparents in his life who were phenomenal role models, who showed him how to love and how to connect. And so he was able to develop those skills himself.

MW: A person might say, “Well, such-and-such happened to me, and it was no big deal. Don't be so fragile." And maybe it wasn't a big deal for that person. For someone else, though, it was a life-shattering event.

What are some of the features that turn what is ostensibly the same experience into something that's deeply traumatic for one person, but forgettable, even meaningless, for another person?

SS: There are a number of identified factors that impact the effect that trauma has on people.

One of the first factors is age: the younger you are, the more impact it will have.

Another is preparation. If parents are going through a divorce, and are able to tiptoe into it and talk to the children about it, it may feel less like an earthquake.

And another factor is the degree of responsibility that the person feels for the trauma. If you think, for example, “the reason that I got raped at the college party was because I was wearing that short skirt,” the harmful effect of that even may be more significant.

Of course there are many other factors, but those are three that come to mind.

MW: Most people who go through severe trauma don't have access to any sort of therapy. What do those people end up doing?

SS: I would say, first, that everyone has experienced trauma to some degree, and everyone out there numbs. Whether the numbing strategy is binge-watching Netflix, or gorging on cookie dough, or injecting heroin, there's some way that we try to numb the pain from the experiences that we've been through.

When numbing comes from substances, alcohol or drugs, it's easy to get addicted. And it’s even reasonable to become addicted, because the drugs work—they numb the pain of those emotional wounds—until they stop working.

Notice that all of those are things that we generally want in our life. We want sex, we have to eat food, we like to be able to exercise.

When a person has an unhealthy relationship with alcohol and drugs, a therapist might recommend abstinence. But when the problem is a process addiction, it can be more complicated. A therapist can’t say “don’t do that again.”

SS: “Don't ever love again.” That's not going to make for a very fulfilling or enriching life. Something that we say here at Driftwood often is that we don't want people to survive in sobriety; we want them to thrive.

MW: How do you help someone figure out whether they've got a process addiction involving sex?

I’m unusual in that I'm both a sex therapist and a sex addiction therapist. I’m interested in helping my clients find shame resiliency. On the other hand, when I meet a client who comes in and says, “I keep cheating on my wife. I'm seeing prostitutes. Because of this, I'm losing my money, losing my job”— this starts to track closely with the diagnostic criteria for addiction.

MW: What’s the difference between “sex addiction” and “love addiction?”

SS: My favorite way to differentiate the two is to talk about the end goals. So let's say we have—and this is going to be gender stereotyping, but I'm going to go there—let's say we have a 25-year-old male over here and a 25-year-old female over there. And they each have had ten one-night-stands in the last two weeks. What are their end goals? Oftentimes, the male is using love to get the sex. The female, meanwhile, may be having sex in order to get the love.

Looking at what the person’s attachment style is, and looking at some of the trauma they've experienced, helps give me an idea of what the person’s end goal is. When it comes to sex: when you're having orgasms, you're getting dopamine pings. It's hitting the same parts of your brain that drugs and alcohol hit. And so you can get addicted to that feeling.

MW: What is a love addict, then?

SS: A love addict is somebody who loses himself or herself in seeking relationships with others. So as soon as they meet someone, they feel an intense connection. I see love addiction happen a lot when people don't have a strong sense of self. And so they get into relationships and the relationships make them feel worthy, feel like they belong. Maybe you’re just a regular person moving through life, and then you fall in love with a punk rocker, and all of a sudden you're a punk rocker, too.

MW: If you're vulnerable to this sort of influence, and you happen to fall in love with the right punk rocker—less Darby Crash than Joe Strummer, say—could everything turn out fine?

SS: As long as there's still some sort of differentiation, as long as you are each able to remain separate. Otherwise, we fall into a thing called codependency.